Cope And Move On…

There are times in life where we’re cruising right along… things are easy… … life is good!  Those are the times when it’s easy to ride the wave, have blind faith, and go on autopilot.  Maybe offer up a few “thank you, God” shout-outs and keep it moving.  It’s easy to sing… to laugh… to run… there are positives everywhere!

Then, life happens and knocks you down.  Sometimes it’s a quick take-down and resiliency kicks in to bring us back up.  Other times, it’s things you think you’ll never recover from:  grief, divorce, illness, tragedy.  This is when my faith gets tested the most.  It’s not as easy to blindly believe when I feel lost or beaten down by life.  It’s hard to remember (or easy to get angry) that it’s all part of God’s plan.

A while back, I heard the phrase “Cope & Move On!”  I don’t remember where I heard that, but the mantra has stuck with me for years.  There have been points in my life where coping was all I could do that day.  As I was going through two seriously hard divorces, there were many days where I would bring my daughter to school, cry in the car all the way to work, then suck up the tears, work all day like I was “normal,” cry all the way back home, suck it up to parent, then cry at night.  This was my routine… coping was all I could do.  Barely.  It was not living life, these were times of just getting by.

I recently lost a dear friend of mine to cancer… someone who touched my life in the best of all ways.  Janet was the older sister I never had.  A beautiful sister in Christ with the most amazing gift of words and prayer that I’ve ever known.  She was taken quickly by an agressive form of cancer four weeks ago.  Those of us left behind are just learning to accept our new reality.  Seeing her seat empty at church each week won’t ever look or feel right.   Nothing about this feels fair, just, or purposeful.   All of our hearts are broken and the grief is so heavy.  We’re coping, barely.

Janet passed on my daughter’s 9th birthday, March 4th.  It was another time of stuffing the tears, so I could celebrate my girl, and then releasing them to grieve later on.  It was tough to feel such deep, conflicting emotions all at once.  However,  that day, I saw an image on social media that brought me to tears.  I had never seen it before, since it would’ve stuck with me being that it’s about my daughter’s birthday.  March 4th:  the only date of the year that gives you words of encouragement… to March Forth.  Wow!  That hit home and I sent it to Janet’s family with hope that it would bring some comfort.  Janet’s husband mentioned this quote at her funeral and it shook me to know that it brought them a flicker of peace.  It’s not a coincidence, in my mind, that this date speaks to inspiring us to move through life with the promise of something in the future.  It’s fitting for both my daughter’s birth and for Janet’s homecoming.

I pray daily for her family and our circle of friends… to be there for each other and to not lose faith in God.  That would break her heart… it would dishonor her and the legacy she lived each day.  Her faith was steadfast, even through her suffering.  She was the model for practicing what she preached.  If we choose to be resentful and angry, it would go against everything she taught.  There are times for that, but it can’t be the end game.

Yesterday, I ran my first trail race ever!  It was called the Texas Two-Way Torture Test  – the name alone should’ve been a red flag!  It was a 10 mile loop course with some seriously steep hills all through the Texas hill country.  The teams had 2 partners who each ran a different direction around the loop… start together, hi-five in the middle, and meet at the end.   I warned my running buddy that he would be waiting for ages for me to come in.  When I signed up for this event, I didn’t realize it was a trail run. By then, I had already committed to my running buddy, so I went through with it. I was a nervous wreck about this race – the unknowns kept tripping me up.

It was a small race and I was often running alone.  Trail running is something I’m definitely not familiar or comfortable with… even hiking makes me nervous about my footing!  I had to be so careful of every single step, and I still almost bit it a bunch of times.  Skidded down a few declines, trying not to fall!  It’s so different than road running, where you can get in the zone and run mindlessly.  I went into the race knowing that it wouldn’t be my best pace and embraced taking my time, running cautiously, and enjoying the beauty. Honestly, I was just hoping not to come in last (which my daughter teased might happen)! In fact, I was talking with another runner before we started & she mentioned it was her first trail race too. She smiled and said, “well, it’s my only one, so I’m gonna PR!”  We both laughed and I shared it with my running buddy.  It was a genius way to go into this race!

I kept thinking of Janet as I ran the course…  how she lived her life in gratitude. The frustrations I had along the way (allergies making it hard to breathe, sliding all over the trail, ankles going every which way, hills that intimidated me)… these were nothing compared to what she endured.  Not only that, but she did it with such grace.  That shifted my mind to being thankful to be out running on a beautiful day, on a course that I never would have been on, to see the views that I did.  Grateful to be healthy and capable of running, regardless of my speed or performance.   I felt sore in muscles I never feel with typical running and loved that it was pushing my body and my mind. When I finished, I did better than I expected and enjoyed the race way more than I anticipated! 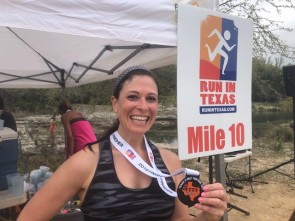 I don’t understand why God took Janet home so early, but I firmly believe that it was done with a higher purpose that will be revealed in His timing. Until then, I strive not to just cope, but to Cope and Move On… a little at a time.

In Honor of Janet

← Lock and Key
House Hunting & Dating – Not That Different →